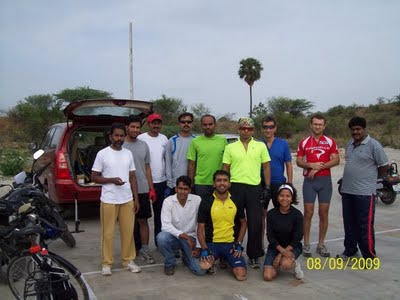 Yup, you guessed it right. I was the lone loser on the race. Now, let me tell you how we ended up with eight winners and one loser on a lovely Sunday morning.
The trial race as it were was scheduled to begin at 8am behind Novotel hotel near Shamshabad Airport. I’ve decided to ride there and try to participate in the race. I was not sure if I could complete the whole event after riding 40km to reach there. But I guess I was cocky more than anything in believing that I could, not only be able to do it, but also ride back from there. That would mean that I would have completed a century on bike plus a 7km run. I think it was a gross over estimation of my capabilities.

Krishna who wanted to join me on the ride to the place called me and we agreed to meet at Gachibowli express highway junction at 6:15am. By the time I reached there, I was pleasantly surprised to see Sandy there. He thought he was alone riding there and was happy to find company. We began to ride on the express highway, on that pleasant morning. Much to my disappointment, I found that the camera on my cell was not working when I tried capturing a few beautiful moments. Miffed, I decided to investigate it at a later point and moved on with the ride. The road was good but with most of it still being a work in progress, it is not a straight forward route. The vehicles however less in number they were this morning, were going at crazy pace and we needed to be careful.

We made steady progress and I tried keeping abreast with Sandy and Krishna. Krishna is an amazingly fit guy for someone at 45 pedaling away on his Mach single speed. Sandy as usual is this lean and mean fitness machine. There was a steep climb where a flyover was in progress. Here Krishna had to walk as his lean frame was not generating enough power to overpower climb on his single speed bike. Right after crossing that climb, I had a flat and we waved Krishna to move ahead while Sandy and I began changing the tube. Good that I carried a spare tube. But it would have been a lot easier with quick release wheels.

As we were in the process of fixing it, Deena and Sunil stopped by on their cars at various times offering me a ride but I was bent on fixing it and riding to the starting point, in the process causing delay for Sandy too. Sorry about that Sandy. Sandy was a big savior for me on the day as he patiently helped me removing the wheel, changing the tube and putting it back on. We did not find anything that might have caused the puncture when we tried to look for something that might have pierced the tire. With the flat fixed, Sandy and I began to ride again and reached the airport Novotel exactly at 8am.

The rest of the guys were already there waiting for us. Shay, has already marked the route for the 2km running, 20km cycling and 5km running which was part of the race. Satish, Ajay Mohan Reddy and Bhanu were the volunteers for the event and very enthusiastically offered their services to help Shay and make the event a grand success. They gave us the directions to the running and cycling trails along with the rules of the race.

The participants were Shay, Sunil, Ed, Alecky, Sandy, Karthik, Krishna, Kanchuki and I. Nine in total. We went to the starting line and started out at 8:25am with the 2k run. I slowly began running along with the others and with in no time the others appeared to be flying away from me. Apparently, the 40 km ride to the starting point served more than just warm up. 🙂

I was consciously trying not to over exert myself and wanted to just complete the race even if I end up at the bottom of the table. This is in many ways first race of my life and was determined to complete it although I was ill prepared for this preparatory race. The 2k run actually was not that hard but I began to sweat profusely even when I did not make any attempt to speed up. This meant that I was dehydrating quickly and losing the only fuel that kept me going till then, Water. Another mistake was not eating anything. I thought I’d later find out what sort of diet should be followed before a race like this.

I could see Shay and Sunil way ahead while Ed, Karthik, Sandy, Krishna were keeping up with them. Kanchuki the only lady on the race and Alecky were behind me as I managed to keep running slowly. As I approached the .75km mark Shay and others were returning to the starting point having touched the 1km mark. I touched the 1km mark where Ajay was taking the timings and turned back to move to the starting point.

Huffing and puffing I manage to reach the starting point where Satish was taking the timings of the participants. I slowly put on the helmet and gloves and got on the bike for the 20k cycling part. This I was confident of finishing this with out any problem and wanted to somehow manage the 5k run after that too. From the back of the Novotel where we started I reached the main road and took a U-turn to get on the 20k route for the race. Right opposite the hotel, I heard the dreaded hiss of a blown tire. I immediately examined the tire to see if something was in it. A centimeter long gash in the tire was wryly smiling back at me and I knew it meant the end of the race for me. I decided to walk back to the starting point which was hardly 200m away. Kanchuki and Alecky were getting on the road with their bikes as I began walking back with mine. I told them the problem and gestured them to move on.

Wearily, I reached the starting point where volunteers Ajay and Satish along with Deena were surprised to me back so quickly. I assured them that I did not set the world record speed by completing the 20k race in 2 minutes but only blew the tire.

I think the gash in the tire was from the first flat Sandy and I fixed earlier. Some glass must have cut through the tire to cause the flat in the first place. Then we changed the tube and went along. When I reached the starting point Shay helped me raise the tire pressure with a foot pump. This might have resulted in the tube jutting out of that cut in the tire and might have caused the blow out. Later that day when I examined I found out that both the tubes had punctures at exactly the same spot where the hole in the tire was there. This meant that I had a great excuse to chicken out from the race. What a performance in the first race of my life.

My initial thought was to wait and participate in the 5k run but that meant sitting there for around an hour and I wasn’t in a particularly good mood after my bike let me down like that. Or is it that I let it down? Anyway, I thought, if I could not be happy by completing the race, I could at least make my wife happy by returning home much earlier than originally planned. Deena, who came by his car to encourage the participants, was planning to return home as he received a call from home needing him to be there. I wanted to see if I could hitch a ride with him although I doubted if my huge hawk would fit in his sedan. But Deena thought we could give it a try and folded the rear seats, spread some news papers and promptly helped me put the bike in with out even removing the tires. Fantastic!!

Deena who stays in Kondapur area has literally gone those extra miles to drop me off in Miyapur near my home. Thanks a ton Deena. We started at 9am from the airport Novotel and reached Miyapur by 9:40am. It took exactly 40mins for the 40k distance. The route looked so much different on a car. All the slopes we encountered earlier on the bike ride on the same route made a disappearing act when it came to the 1k+ horse power of the Skoda.

Although I could not be there to complete the event, I called up a few to know how it went. This is what they had to say.

Sunil’s account: “Shay was as usual leading the gang and did a splendid finish at the end. Ed (the old man) defied his age and beat most of the participants who were half his age. He is a true inspiration for everyone. The good thing about this practice was that everyone completed the event. This gave a lot of confidence that this competition is suitable for all. Many thanks to Bhanu, new daddy Satish and his friend(Ajay) for volunteering for the event and Shay for marking the route.
In the end Sandy, Ed, Kanchuki and Dina got together at Ed’s place for some beer after the race. It was a wonderful day.”

Sandy’s account when I asked if he rode back home: “I couldn’t ride back home as the running took its toll on me :), had it been only biking, I might have pulled it off. But it was all great fun; we went to Ed’s house for some chilled beer and banters.”

Krishna who along with Sandy finished the race after riding the 30+k to reach there thought “May be it was not such a great idea to ride to the starting point. We could have taken the race as it is and looked to complete it better than what we finally managed. But it was an excellent event and lessons well learnt.” He is all of 45 years young. Kudos to both Krishna and Sandy for having completed the event, even after riding around 30+k to begin with.

The Results: Shay 1st, Sunil 2nd, Ed 3rd, Sandy 4th, Karthik 5th, Krishna 6th, Alecky 7th, Kanchuki 8th and Venky DNF (Did Not Finish). For me all those who completed the race were true winners for their spirit of participation. I was the lone loser on the day as I could not finish it. With lessons learnt, I will be better prepared for the next time though 🙂

Here is the link to the photos from Sunil’s camera. I have uploaded to my picasa to be able to add tags: